It's just over a week since I became a fully fledged vegan for Lent and things couldn't be going any better. I honestly haven't missed dairy and all of the restaurants / food traders I've visited have been genuinely happy to accommodate me. Bailey has also been bringing me daily vegan treats from Village Stores which has been lots of fun... admittedly some have been downright revolting but some have been amazing. 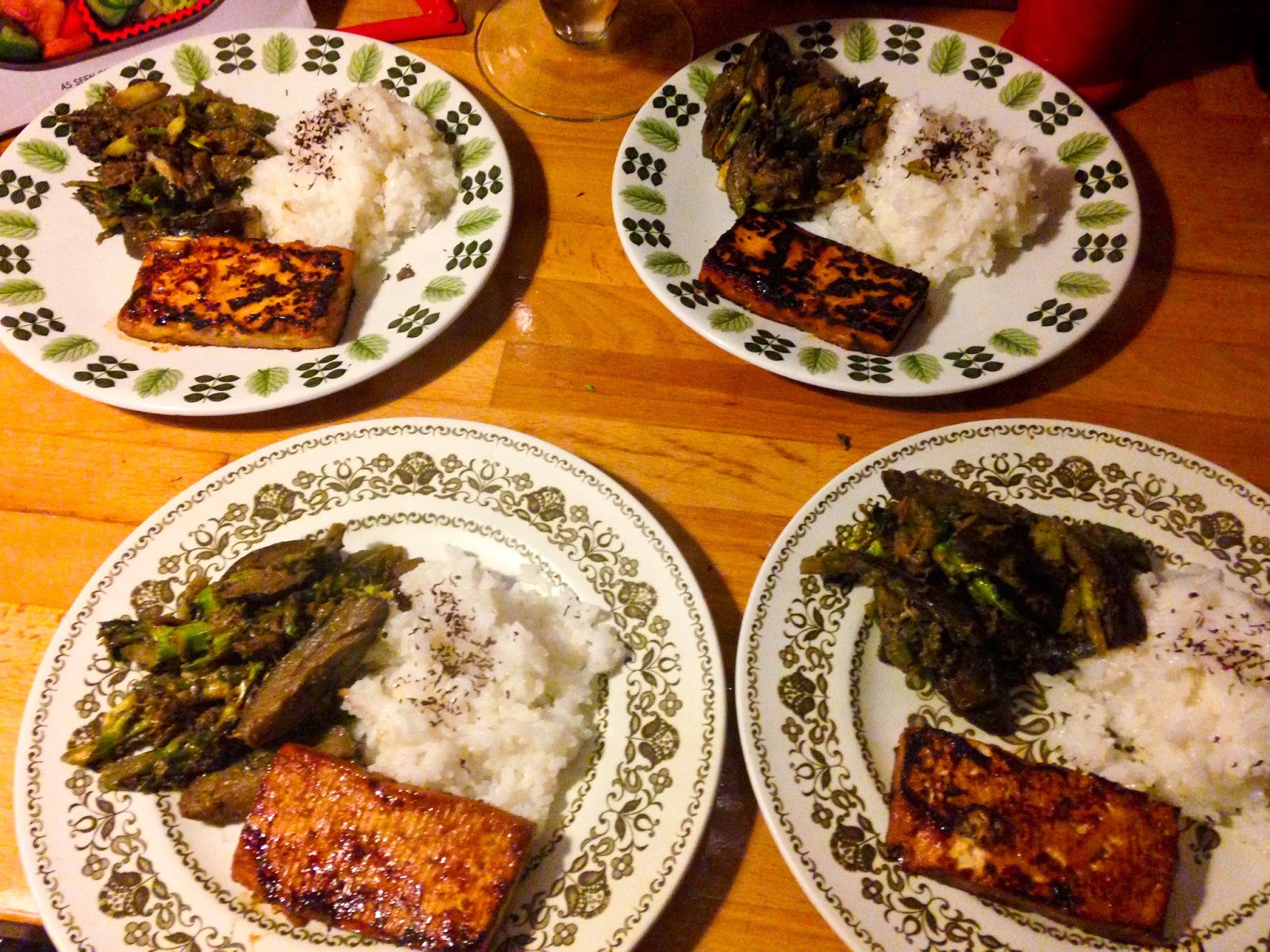 One of the things I was really hoping to achieve through this whole vegan thing was to try out loads of new recipes. Last night was my first chance as our vegan friends Hannah and Gray were coming over for a Japanese tea.

We started the prep with a trip to our favourite WH Lung. The Japanese section in here is pretty good and they seem to have gotten a few new products since I last looked. One of the little gems I managed to find this time was those tasty "sweet tofu bags" as I always call them, or tinned inarizushi! Very sweet but delicious and 100% vegan! 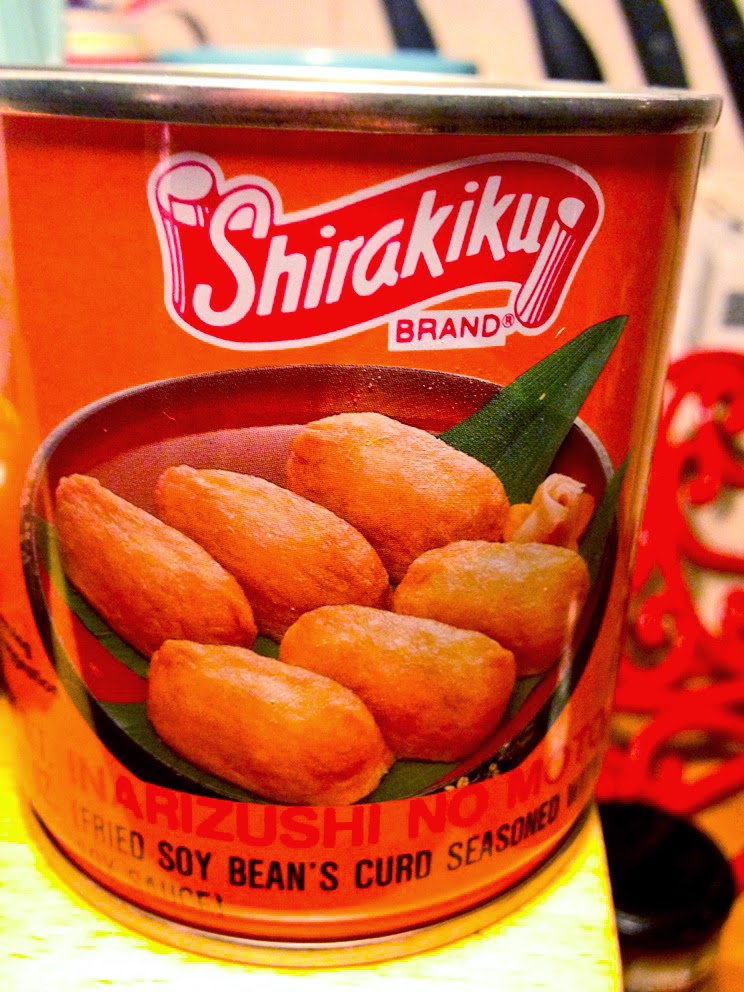 For our main we wanted to use some of the lovely veggies from our weekly veg box (also from the aforementioned Village Stores- shop local!), including the fattest purple sprouting broccoli I've ever seen and some baby aubergines that had massive thorns on the stalks - which I didn't notice until one of them was impaled in my finger. OUCH! I adapted a BBC Good Food recipe for these and really enjoyed the creamy miso sauce it made.

There were a couple of mishaps including forgetting to buy ginger (hence the use of sushi ginger pickling water!) and almost adding honey to the teriyaki sauce before using my noggin and realising that honey is clearly not vegan, but everything turned out OK in the end! 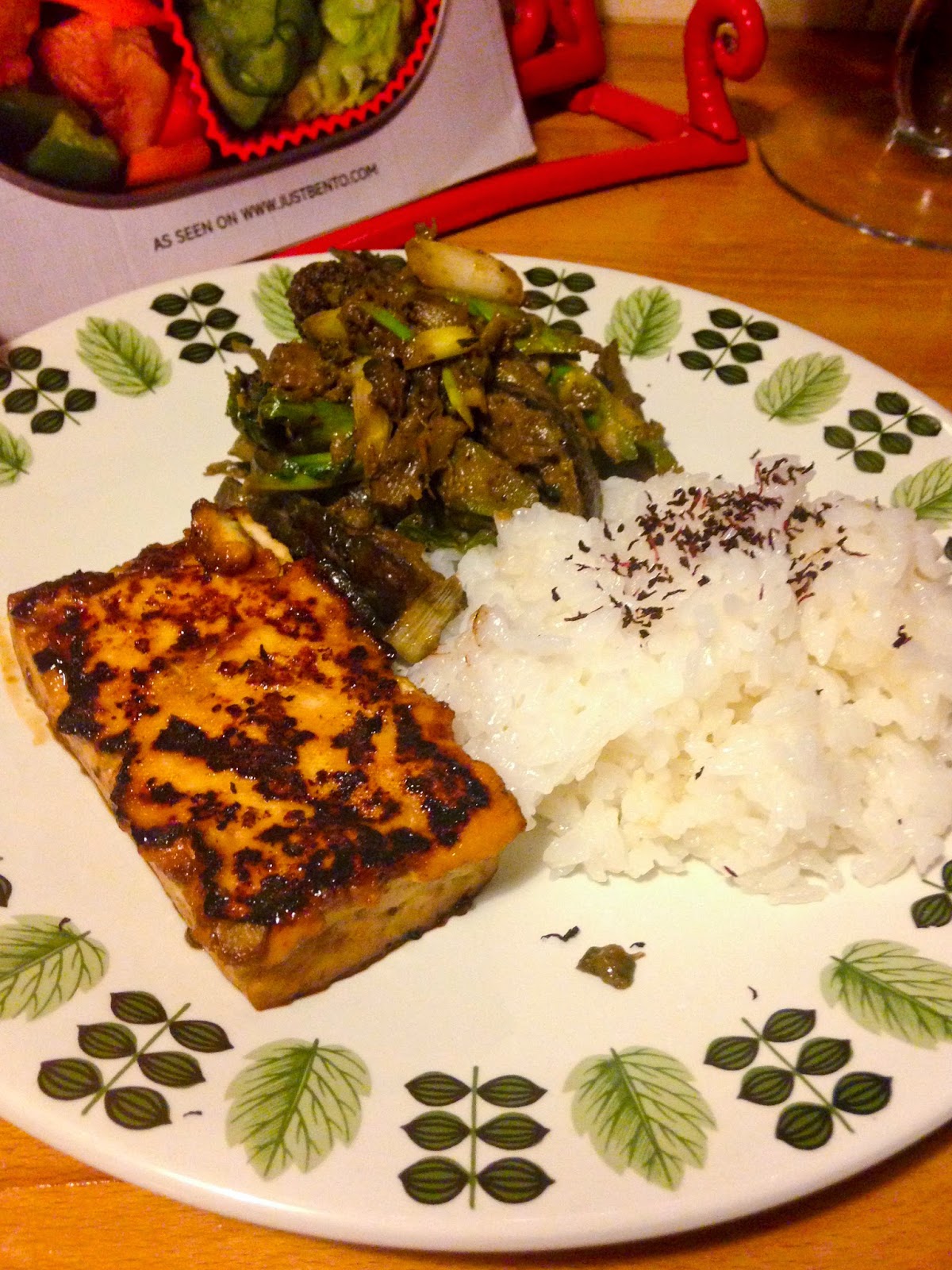 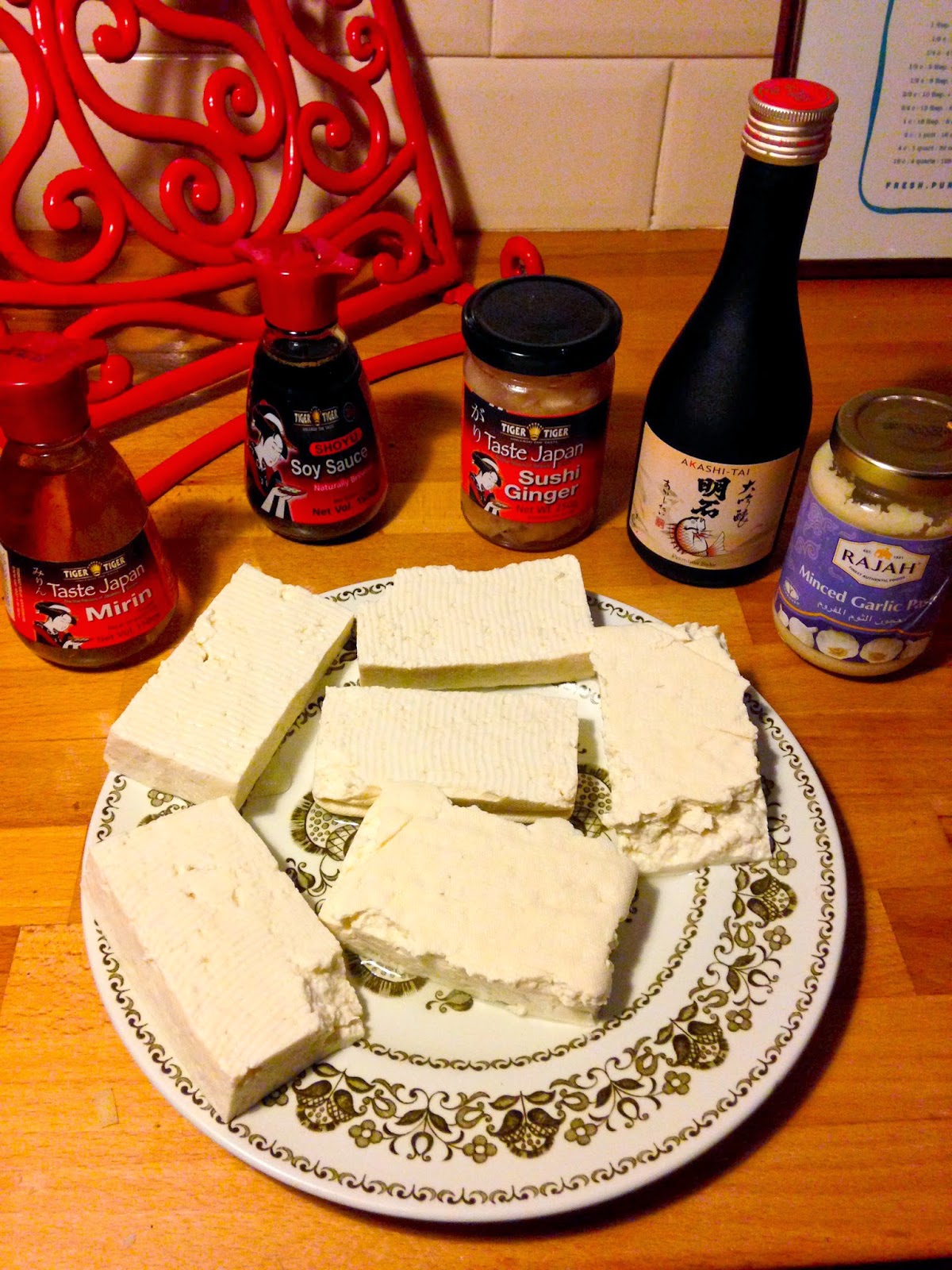 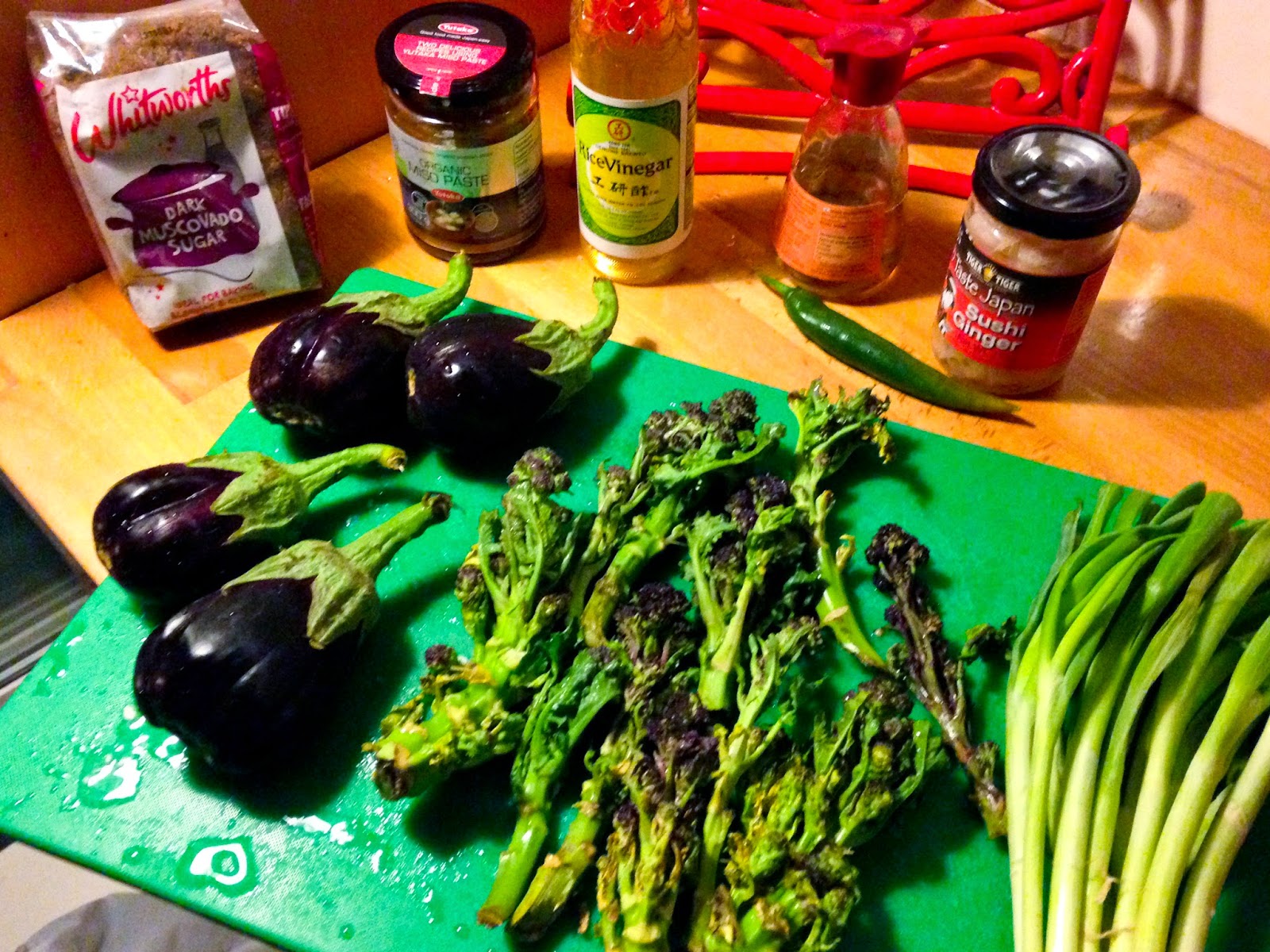 Start by marinating the tofu. Cut the tofu in half widthways so you get two nice thin steaks out of each steak. Dry the tofu by placing kitchen towels in between each steak putting something heavy on top, like a big cookbook (I didn't have time to do this so I'm sure the dinner would have been better if I had!) Make up the marinade for the tofu by mixing together the soy, mirin, sake, gingery vinegar and garlic. 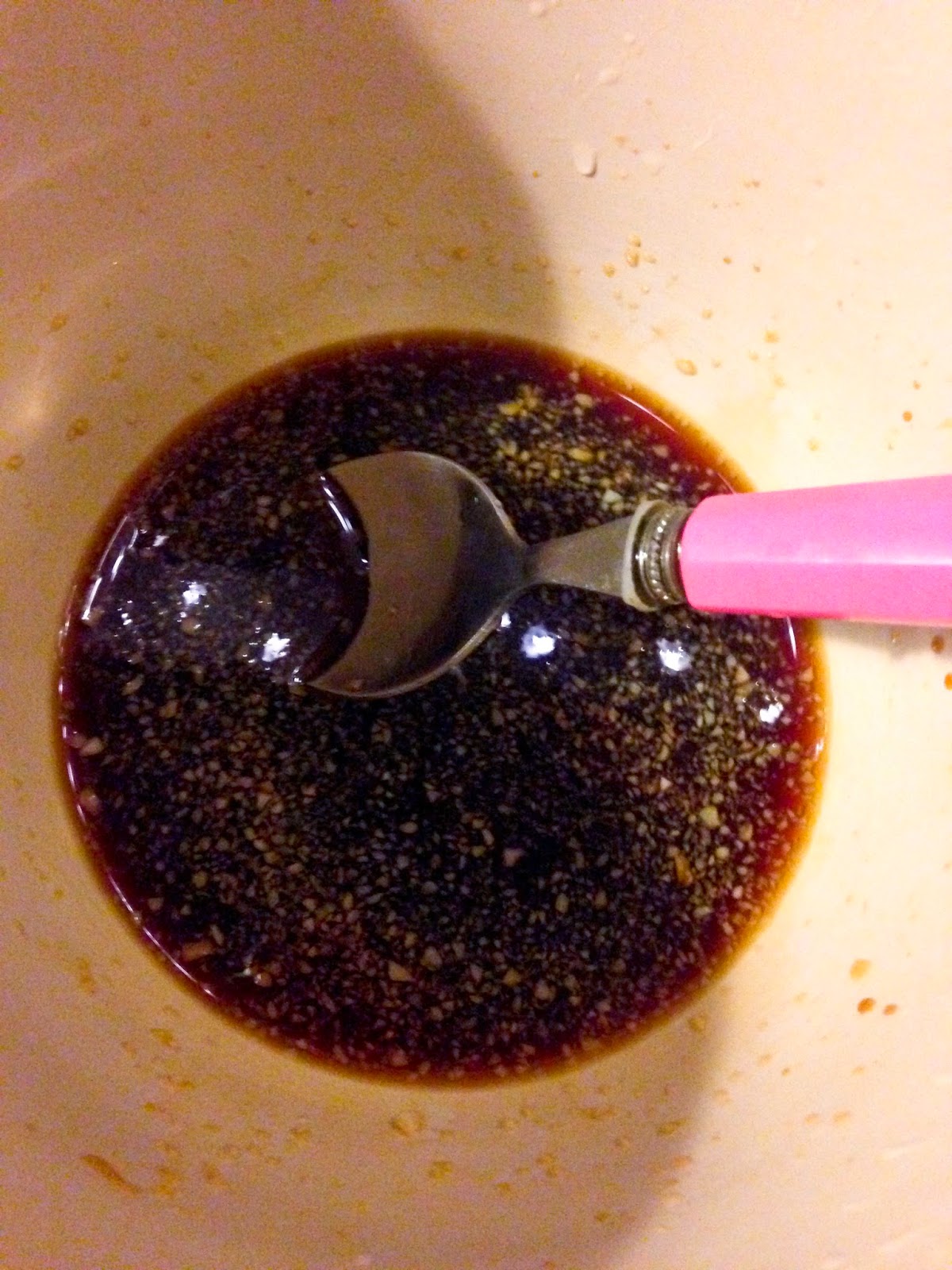 Stir well then transfer to two shallow dishes. Place the tofu into the marinade and leave in the fridge for as long as you can. I left mine while I prepared the rest of the meal, which was a couple of hours. Keep turning the steaks to make sure they get a good coating. 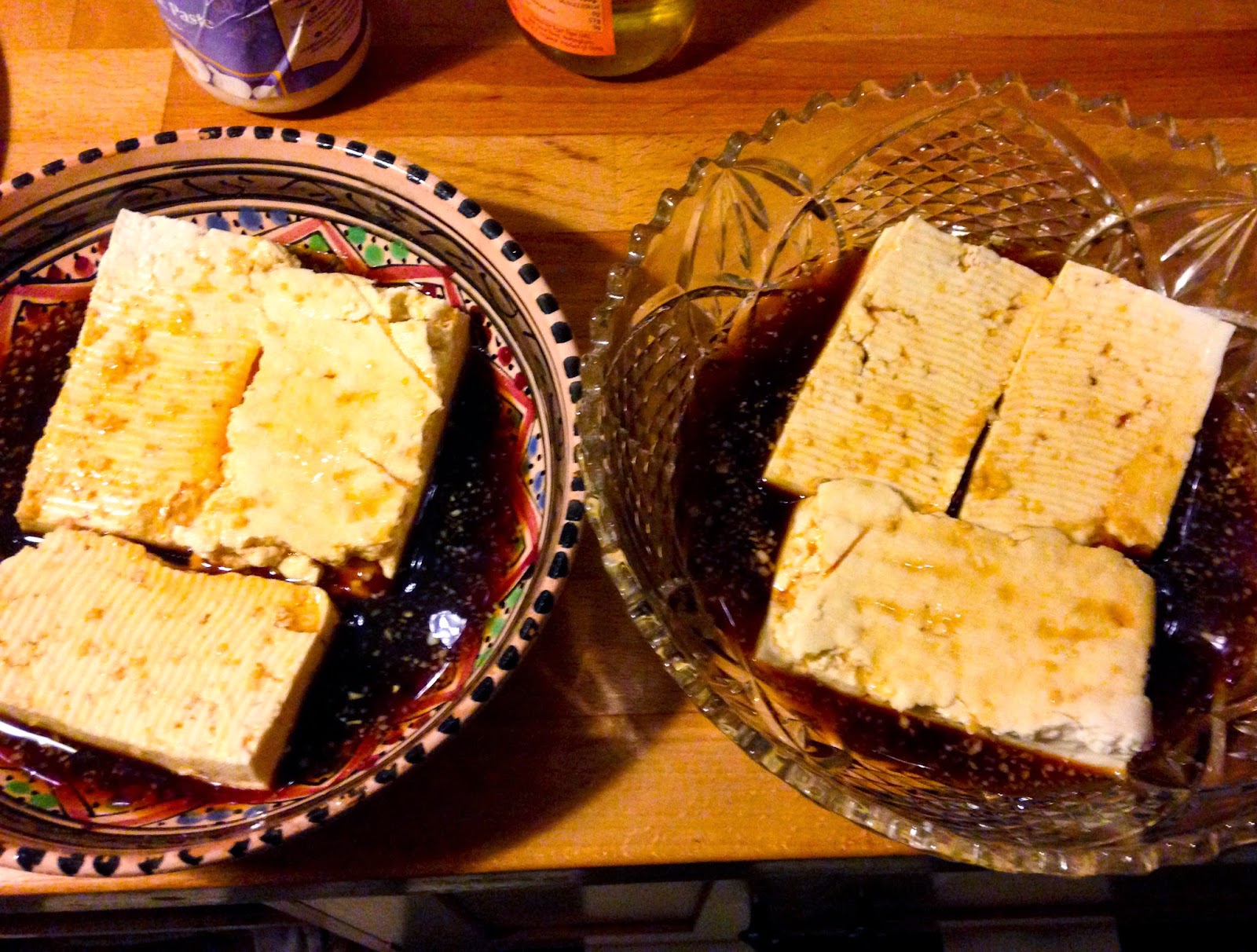 Meanwhile, prepare the veggies. Mix together the miso paste, mirin, rice vinegar, sugar, gingery vinegar and water together in a bowl. Put to one side. 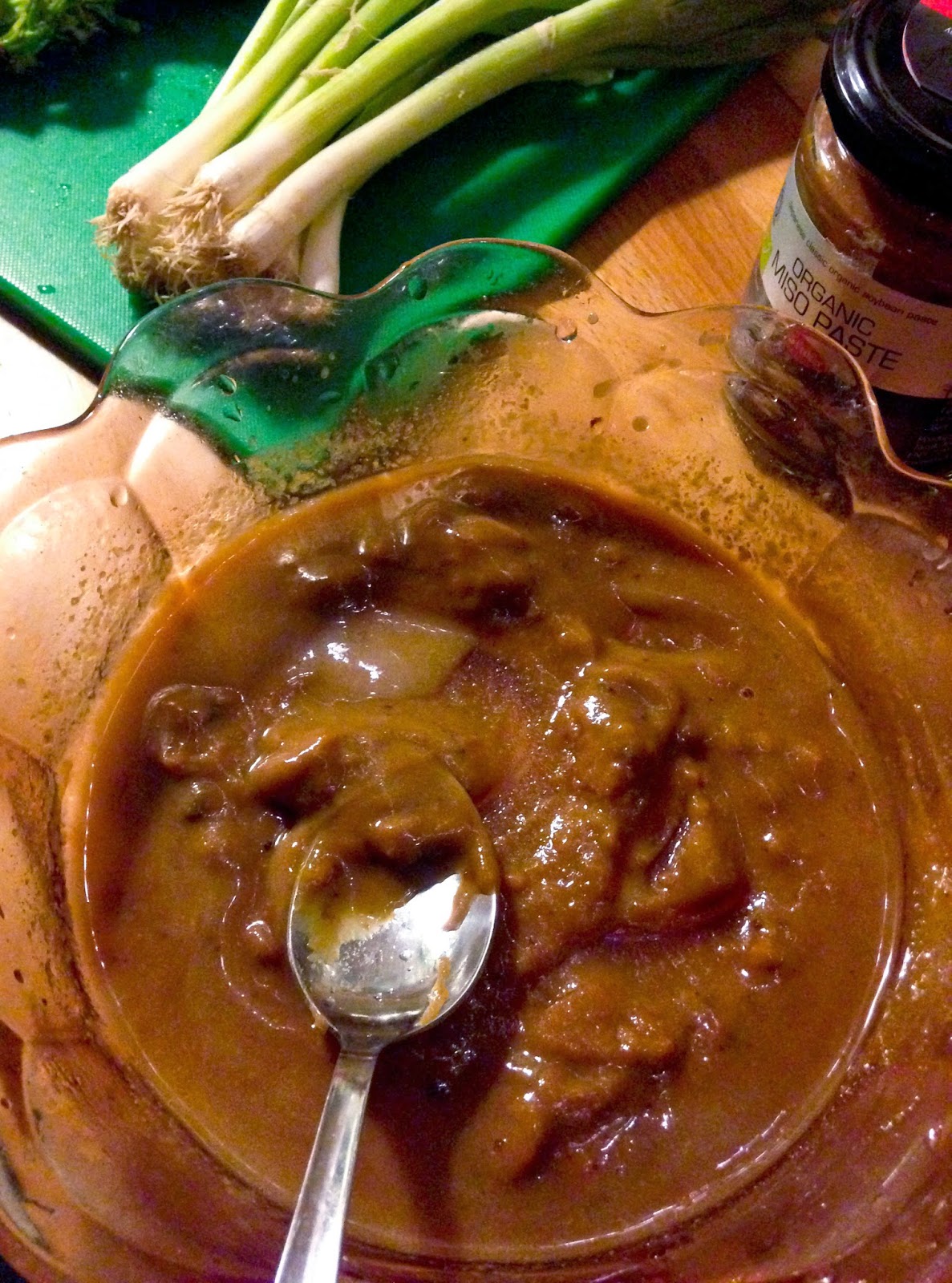 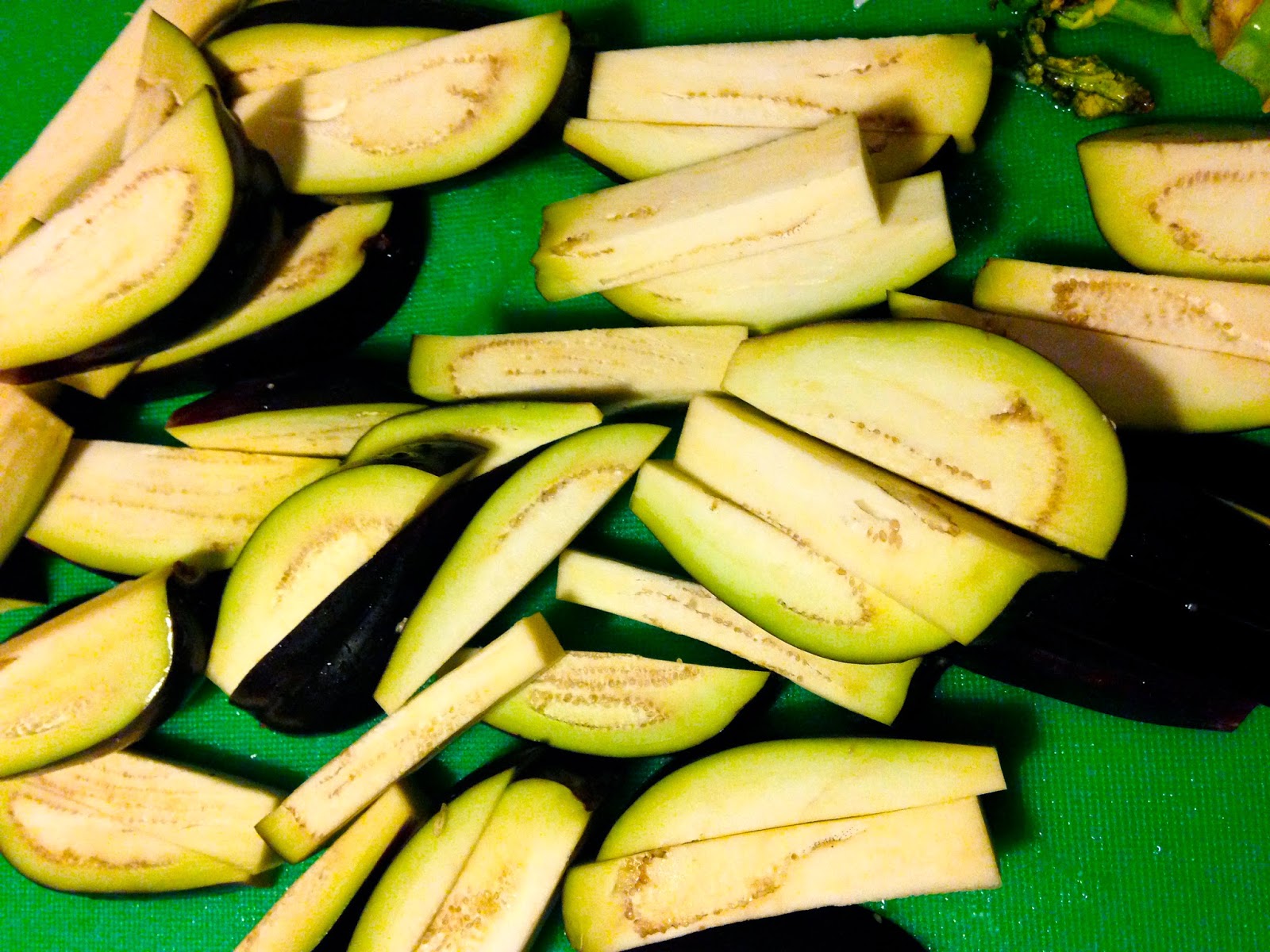 Give the purple sprouting broccoli a bit of a chopping up as well, so you don't have any stalks that are too fat. Also deseed and roughly chop the chilli. Add those to the wok and fry everything for around 5 minutes. 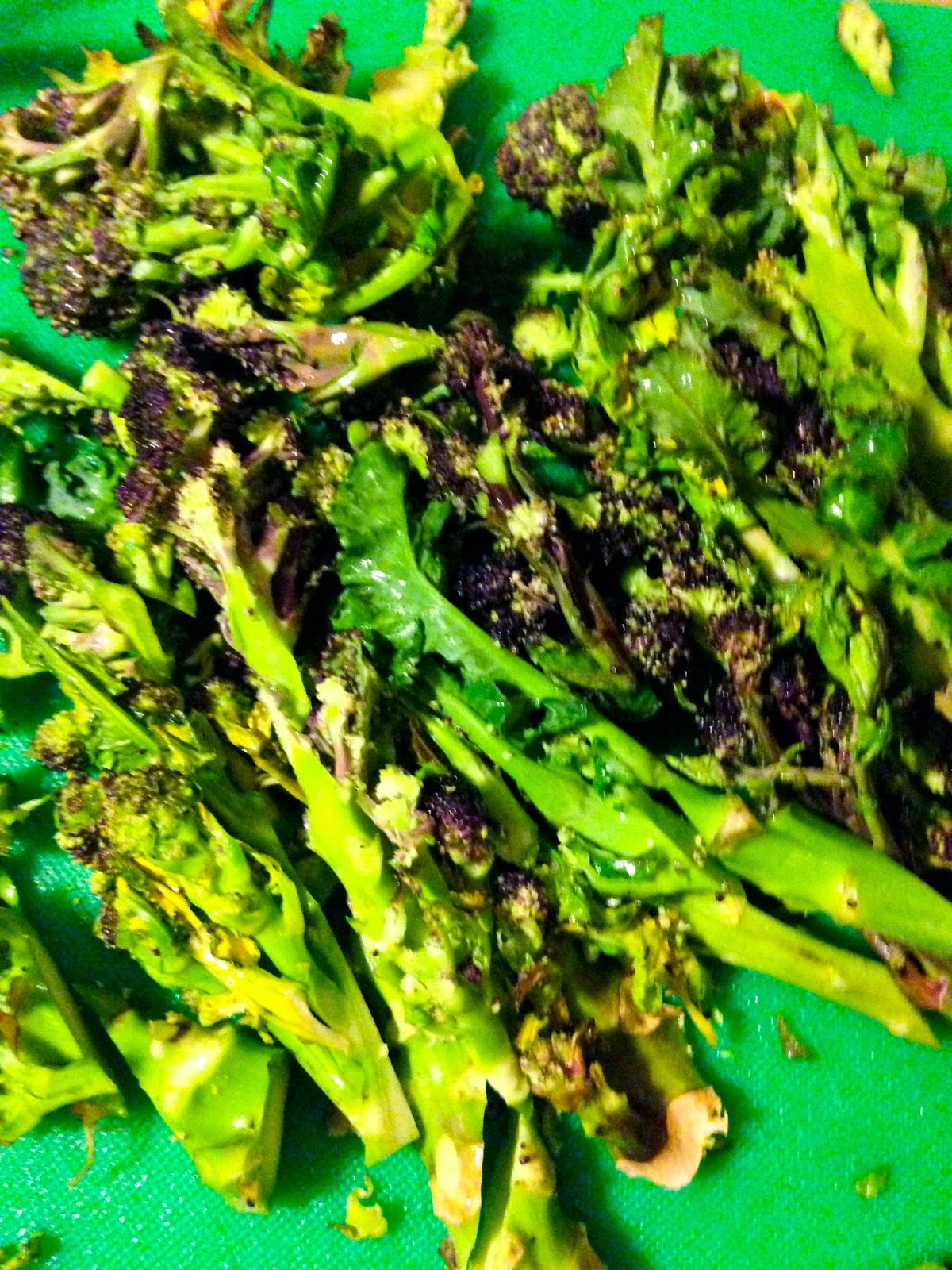 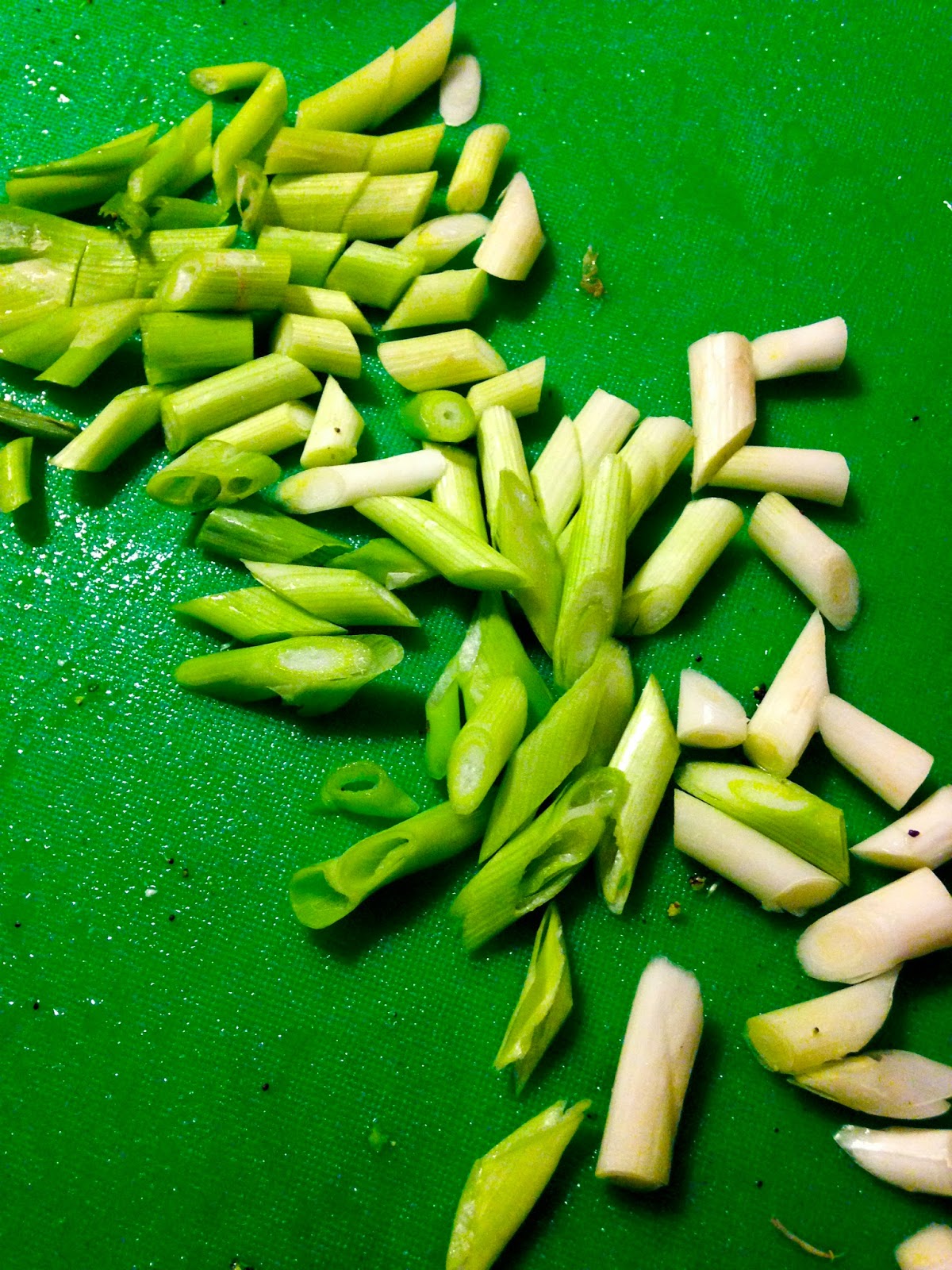 Just when your sticky rice is almost cooked, heat up two frying pans to a medium-high heat and add the tofu steaks. Pour in some of the teriyaki mix to the pan and reduce down, turning the steaks as necessary. Add more of the teriyaki mix until it's all absorbed and has gone kind of sticky. 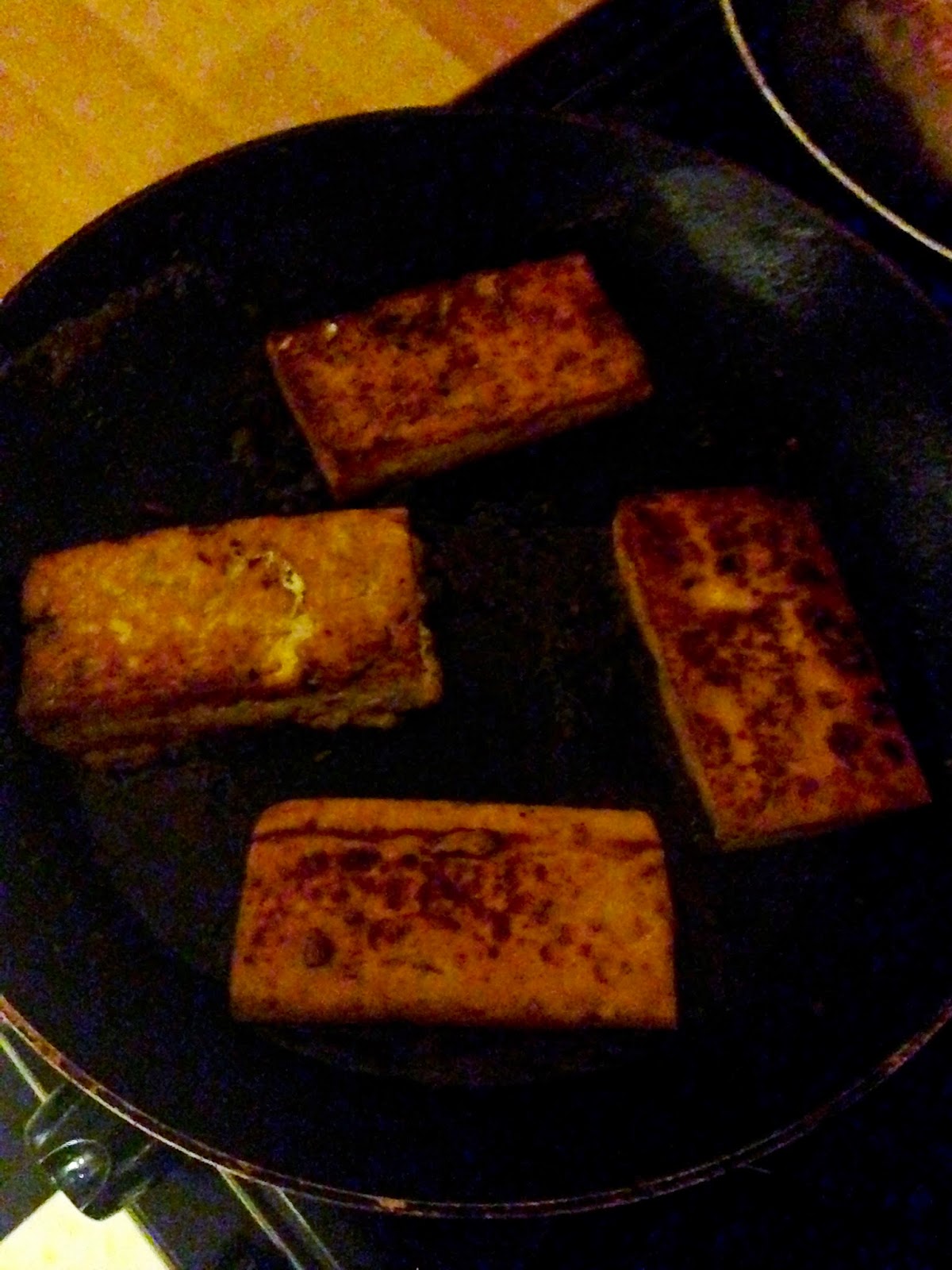 Meanwhile, also heat up the wok again to warm the veg through. 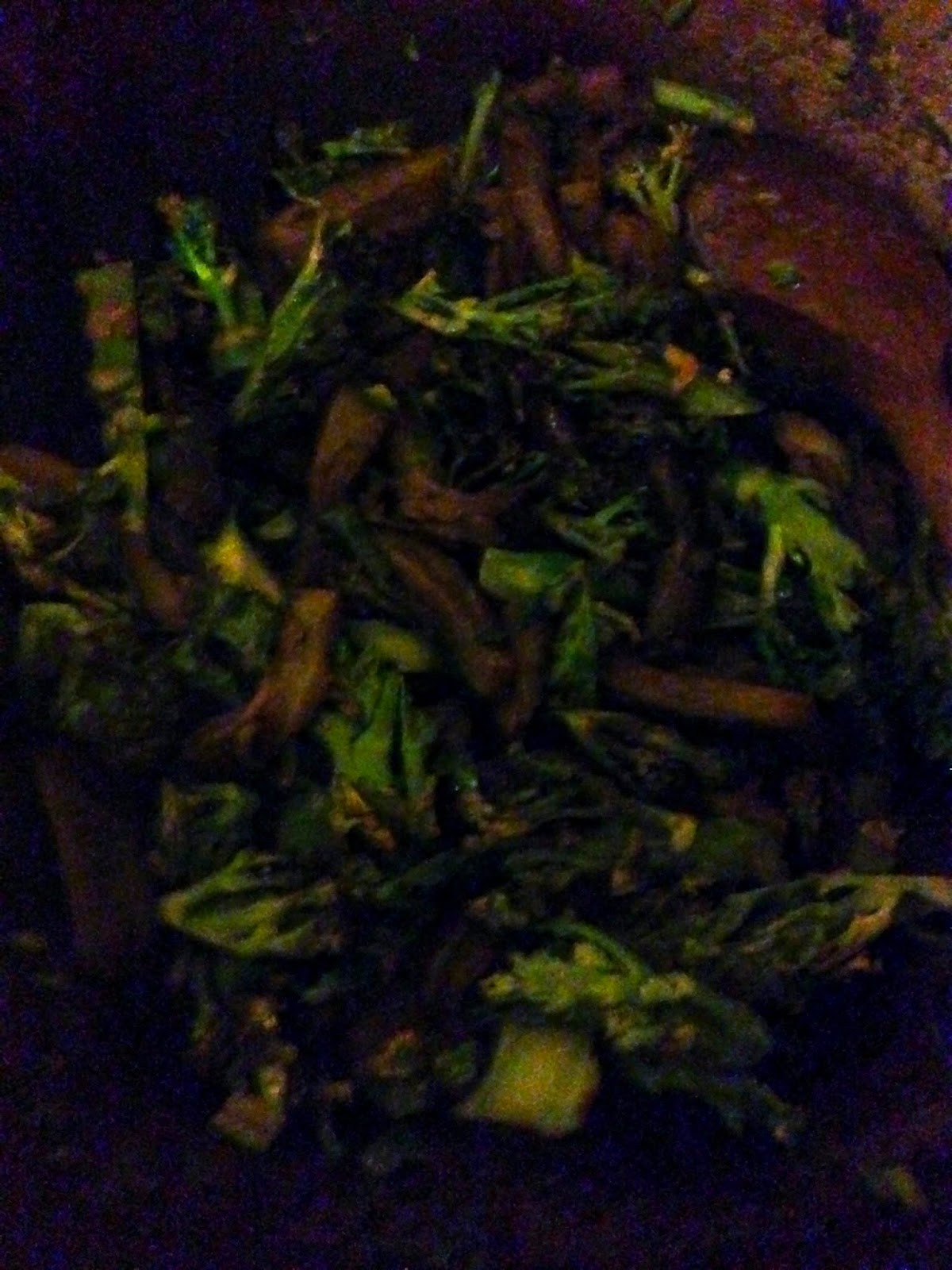 Serve the tofu with a nice spoonful of the miso veggies and a pile of sticky rice sprinkled with the shiso sprinkles. 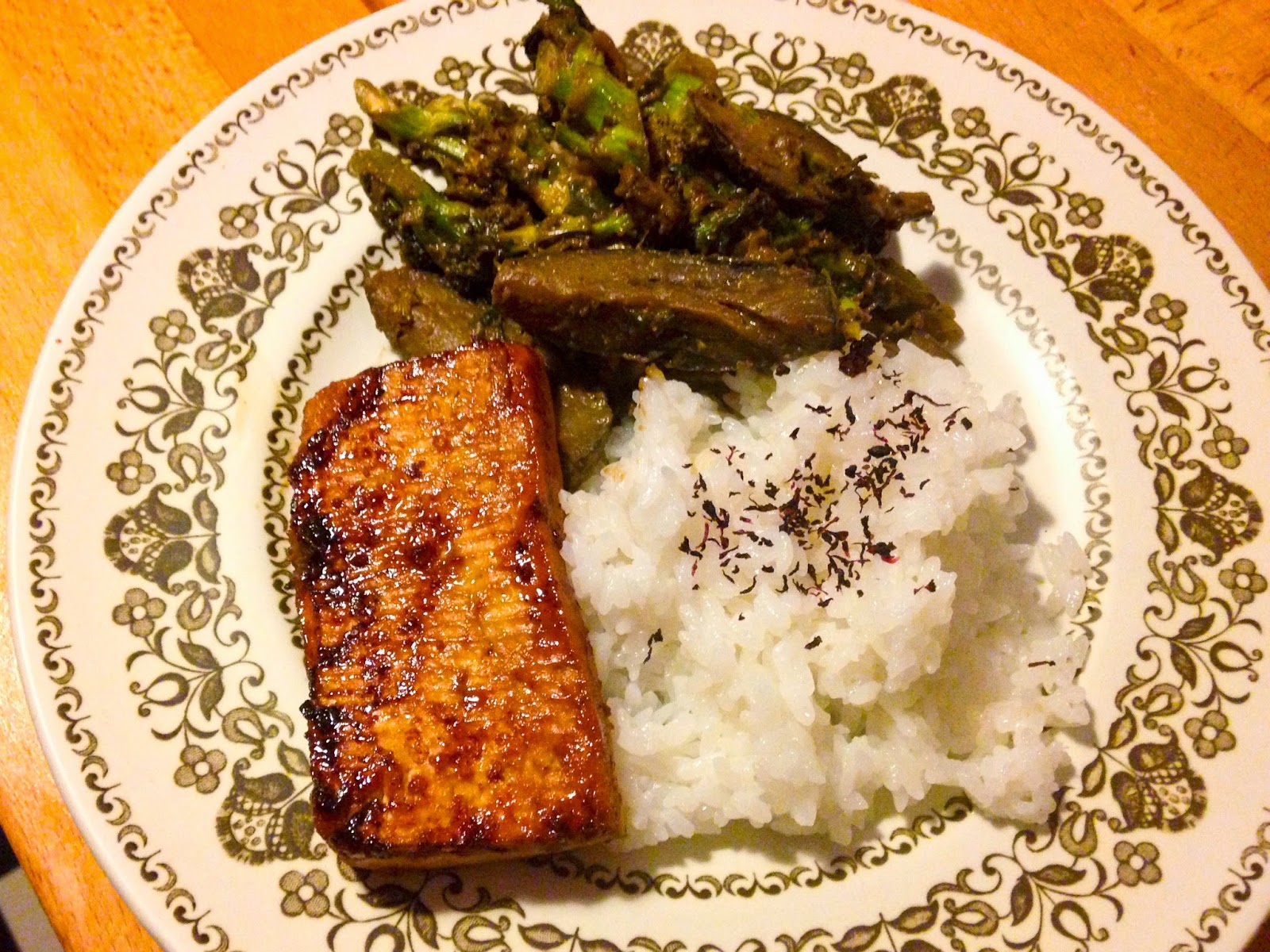 Posted by Jules at 10:29 AM
Email ThisBlogThis!Share to TwitterShare to FacebookShare to Pinterest