Bailey loves pizza. He LOVES pizza! I don't know anyone who doesn't like pizza, but I also don't know anyone who likes pizza quite as much as Bailey does. I think if he had to, he would take a bullet for pizza. Bailey's love for pizza does mean that when we go on holiday, we have to find out who sells the best pizza and pay them a visit. In Chania, Crete, this place is apparently Kariatis - reportedly "Chania's best Italian restaurant". We had high hopes for this Kariatis; so far the food we'd eaten in Crete had been awesome and in many ways reminded us of Italian food anyway - similar ingredients, simple, hearty, prepared with love, etc... 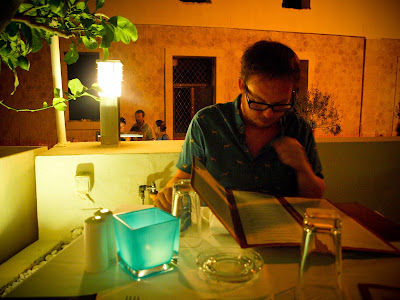 As we arrived at Kariatis we felt relieved that we had donned the glad rags and run a comb through the barnet. This place was swanktastic, complete with blue uplighting and ambient music. There was even a lime tree next to our table. In my opinion, swanky isn't necessarily a bad thing, as long as it's not all style over substance. That said, I do tend to approach swanky places with some suspicion. 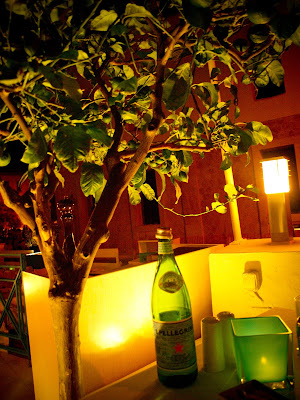 The menu was pretty massive (Gordon Ramsay wouldn't have been impressed) so I was thinking uh-oh, style over substance? However they soon distracted me by brining out some great olives with great bread with great Cretan olive oil for us to nibble on while we decided. 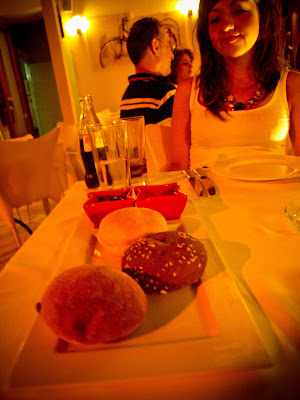 We started with a massive plate of Gnocchi al Tartuffo for Bailey - simple and surprisingly light with a little bit of bite to the gnocchi and a nice herby, buttery sauce and a good whack of truffle flavour. 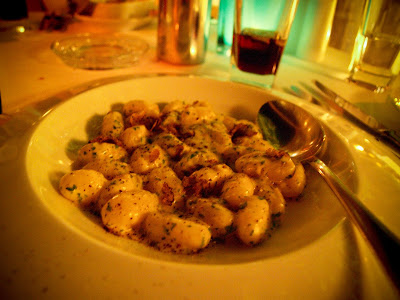 I'd also had my eye on the gnocchi but let Bailey have it because I'm nice. Instead I opted for the Crepe Peccorino & Porcini. This was very creamy and packed full of melty cheese, a little rich for me but delicious all the same. 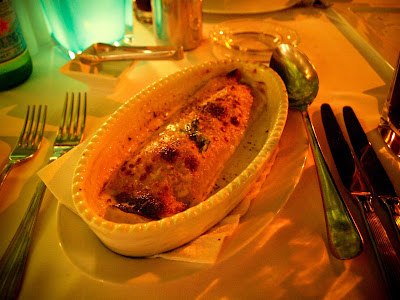 So far, very good. These portions were massive and really decent food, not style over substance at all. Hurrah! We'd also noticed the restaurant had its own wood-fired pizza oven and you could see them making the bases fresh, very exciting indeed for pizza-loving Bailey. He settled on the 'Classic' topped with ham, bacon and mushrooms. He was generally very impressed, the base was nice and crisp but due to the vast amount of toppings it had gone a bit soggy in the middle. Like the other portions this was huge and Bailey was, I quote "deeply ashamed" when he couldn't finish it... 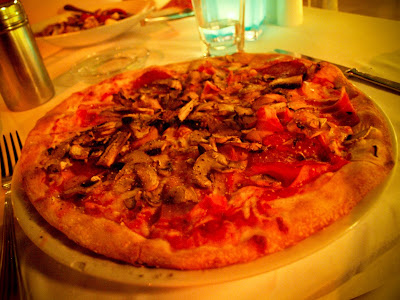 My main was a big bowl of Linguine Verde & Balsamico. This was an alright dish with lots of well cooked pasta, creamy goat's cheese and tasty vegetables but it didn't blow my skirt up. Although I love the Cretan oil there was a bit too much of it and it was quite greasy. Unfortunately the least interesting dish of the night. 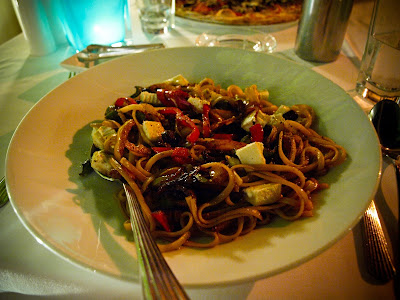 Unsurprisingly we were now far too full for pudding but the dessert menu looked brilliant - we were tempted to come back the next day for a dessert. However, we had seen the staff bringing out what we assumed to be the local palate-stripper raki to people and were bracing ourselves for this. Imagine our delight to be told "It's not raki" as the bottle was placed in front of us along with some truffles. He must have seen the fear in our eyes. What was in the bottle was in fact a delightful dessert wine and the truffles were phenomenal too. A wonderful end to the meal! 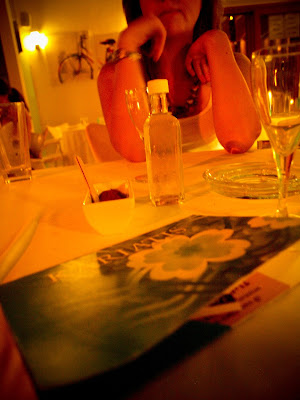 Kariatis turned out to be a very good choice of dining establishment for the evening. We concluded that, while the place was stylish, it was most definitely NOT style over substance. We really liked the atmosphere in fact. I loved the little touches like the music which was amusing 'piano bar' covers of well known ditties (including the Twisted Nerve / Kill Bill 'whistling' song) which made us smile. The service was also some of the best we'd experienced in Crete and that is saying something. The staff, whilst fitting in with the swankiness of the place, were so NICE, warm and professional. Our waitress had the most dazzling smile and spoke excellent English. In terms of the food, we enjoyed tasting Italian made with Cretan touches but I reckon they could cut that mammoth menu down and get ride of a few duff dishes like my pasta as they obviously know how to put up decent plates of authentic food. Overall though, yet another very lovely and memorable evening out in the beautiful Chania! 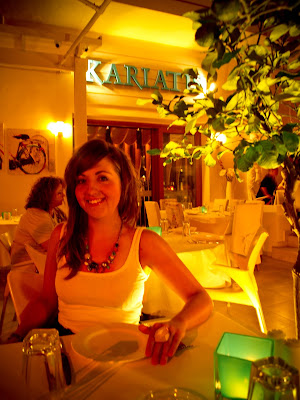 Posted by Jules at 8:27 AM
Email ThisBlogThis!Share to TwitterShare to FacebookShare to Pinterest