It’s been a while since we last wrote a blog post. So long in fact that I feel a bit like I’ve forgotten how you’re supposed to write a blog post. We have recently moved house, which people say is one of the top three most stressful experiences of your life. It’s not actually been that bad but I certainly haven’t had time to spend the usual number of hours a day thinking about food, cooking, going for meals and lovingly nurturing our blog (i.e. obsessively checking the stats). Having said that quite a lot of exciting foodie things have happened in this space of time which I’ve been really looking forward to writing about as soon as I unpacked the box containing the laptop. One of those things was an invitation to our first ever bloggers night at Thomas Restaurant in the Northern Quarter. 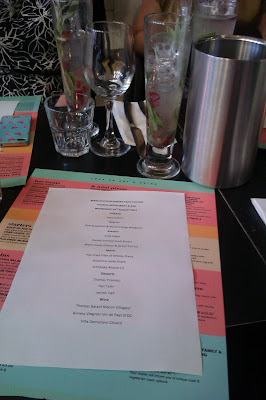 Thomas is one of those funny places that I’ve noticed but I sort of haven’t. I’m not too sure why – I can remember looking in late at night and thinking it looked pretty swanky but we had never actually gone in. I think possibly because Bailey and I are not in the least bit swanky. On arrival however, we were taken on a tour of the restaurant and saw that it was a rather lovely building and although I was right in thinking it was pretty swanky, it is a bit cosier than you’d think from peeping in – a good location for an intimate meal. I was quite excited that the opening gambit from  our hosts for the evening Yvonne and Nicky was to ask us which cocktail we’d like to try. I went for the Joan Collins – like its brother Tom but with sage and grapes. I love grapes, what a splendid idea to put them in a cocktail – not too sure if I was meant to munch them all up like I did? The sage was quite an interesting addition which I would never have come up with in a million years but it really worked. Bailey had a smooth, strong Negroni - this place is serious about cocktails. 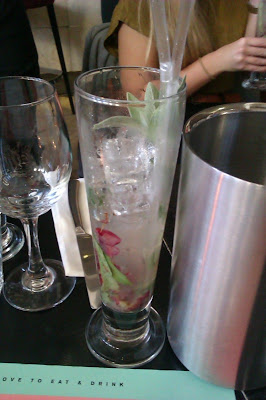 Next we were taken over to our exclusive bloggers’ table which was very lovely especially as we were seated opposite the fabulous Manchester Foodies who I already knew were going to be lovely (you can tell from the way they write) and they WERE. We also got a chance to chat to Anabelle who was stepping in to write for Mangechester and the hilarious Foods To Try Before You Die.

Yvonne explained that we were going to be sampling nine dishes from their seasonal menu. We were quite upset to hear that the Autumn menu had just been brought in (we were still in ‘clinging on to the last shreds of summer’ mode) but everything sounded tasty. We were also going to be trying a selection of Yvonne’s favourite wines – I have to say we are pretty much wine dunces but we both enjoyed the wines we tried and did appreciate Yvonne’s enthusiasm. 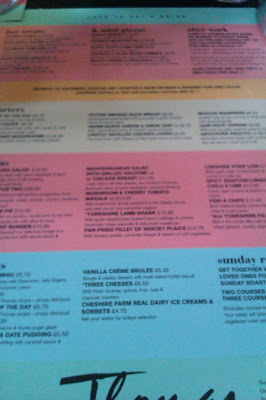 Starters soon arrived and the favourite of the day had to be the Crab Cakes. Bailey commented that he normally avoids ordering any kind of fishcake as they are quite difficult to get right and very often mediocre. Well Thomas had got these bad boys bang on. The mini crab cakes with their mega crunchy exterior were the perfect size and tasted gorgeous. I’ve been a bit worried about writing about our visit to Thomas having left it so long, but I can still remember the flavours of the lovely mango and avocado dressing that the crab cakes were drizzled in as if it were yesterday. Lovely stuff. 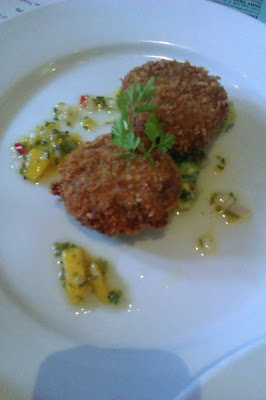 The Warm Goat’s Cheese and Onion Tart wasn’t what we were expecting at all and at one point I accidentally referred to it as a “cheesecake” because it really was more like a savoury cheesecake. The pastry was very nice and I loved my first bite as it really hit me with a whack of strong goat’s cheese flavour. I was a bit disappointed that every bite after that didn’t have the same strong flavour – I love goat’s cheese and its unique taste so would have liked that to be running through the whole starter! All in all a very decent vegetarian option though. 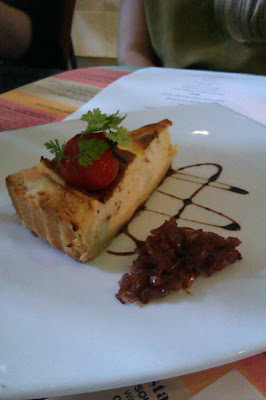 As I don’t eat meat I didn’t have any of the Potted Smoked Duck Breast but Bailey was quite excited to try it as eating duck is a rare luxury for him. He felt the dish was a bit unappealing to look at – a mixture of greys and browns, and in the end it wasn’t up his street as it was quite bean heavy and the duck was a little dry. Not a bad dish and it may have been to some people’s tastes (Yvonne explained the inspiration behind the dish was bean cassoulet), but Bailey felt it paled in comparison to the other starters we tried. 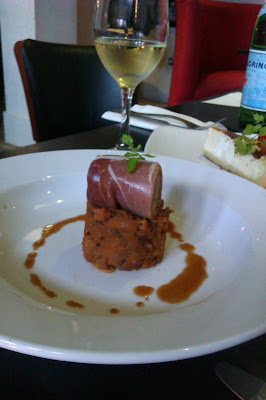 Mains were looking pretty good all round and I began by immediately cutting open the crumbed, deep fried egg on top of the Artichoke Risotto. The moment when the yolk oozed all over the rice was quite a triumph and the egg tasted amazing. 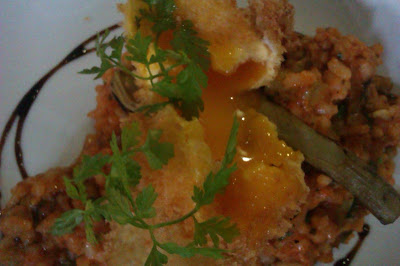 Why haven’t more places thought to deep fry an egg? Apparently it is pretty difficult to get right but this was spot on. The risotto itself was well cooked and I liked the artichoke but I think if I’d eaten a whole plate of it the intense tomatoey flavour might have gotten a bit too rich. 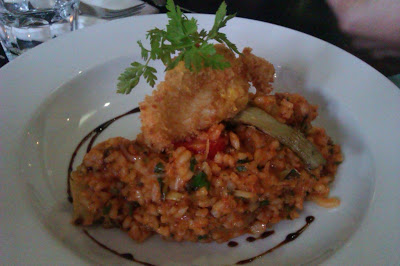 The Pan-Fried Fillet of Whitby Plaice is exactly the type of main I would normally order at a restaurant like Thomas and this didn’t disappoint. It was just a really delicate dish with soft, tender fish, nicely cooked vegetables and a brilliant sauce. The fondant potato was excellent and I found the whole thing really moreish, which isn’t a word you’d expect to use about fish and veg. 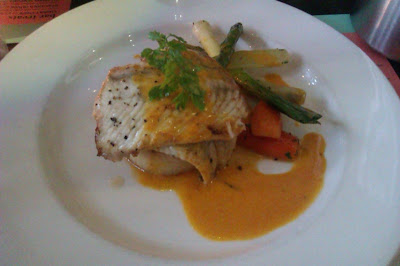 Again I didn’t personally eat any of the Yorkshire Lamb Shank but being the worst vegetarian ever as usual I couldn’t resist a forkful of the accompanying dauphinoise potatoes which were lovely and nutmeggy (not as ace as the fondant on the fish though!) Bailey assured me that the dish as a whole was delicious – the lamb shank had a good char on the outside and was rich and moist on the inside. 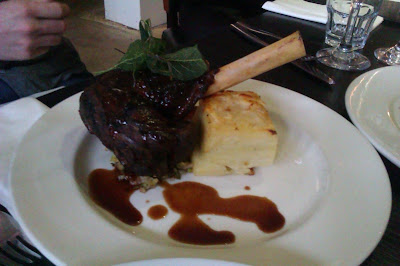 Desserts were Tarte Tatin, Lemon Tart and Tiramisu – all very decent examples of these classic sweet treats each with their own little twist. I liked the crispy, brulée –like topping on the lemon tart and found this dish quite irresistible, then again I find most desserts irresistible. 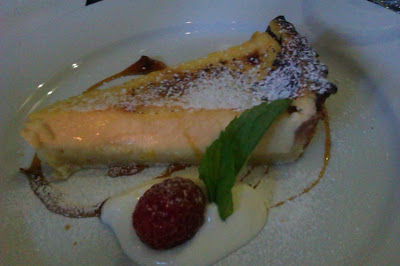 The tatin was pretty good, my only complaint being that the caramel sauce it was sat on which looked so delicious and ready for the scraping had hardened and stuck to the plate. 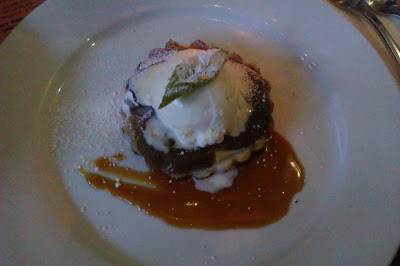 Our favourite pud was definitely the Tiramisu which was based on one of the chefs’ family recipes. Bailey said this was the best tiramisu he’d ever had – we were impressed with how they’d managed to make something quite special out of an old favourite. 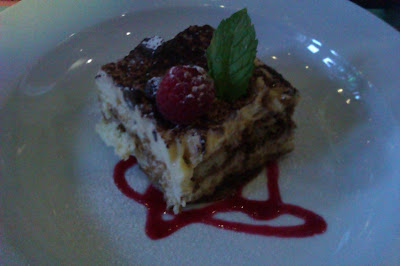 I should also mention that service was excellent throughout - the waiting staff were friendly, not too informal and very helpful. I’m also sure that for any other wine numbskulls like ourselves the staff would be happy to give recommendations on Yvonne’s carefully thought out wine list.

A very pleasant night was had by all and I have to admit that we did stay to consume a few more beverages while watching a surprisingly enjoyable open mic night which Yvonne was hosting upstairs in the new private bar area. We really enjoyed meeting the other bloggers and appreciated the opportunity Thomas gave us to offer feedback on their menu and hear about their plans. Their philosophy was a good one – to take popular comfort food dishes and traditional favourites and make them into something a little more special, something I think they are achieving quite well. I think Thomas would be a good place to go for a quiet meal as a couple now that I’ve found out that it’s not just a swanky place that me and Bailey wouldn’t be swanky enough to go into. 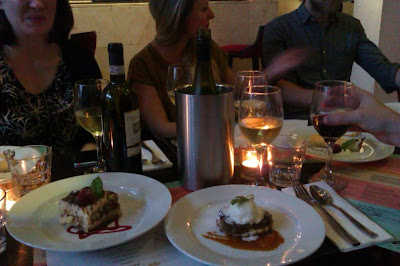 Posted by Jules at 7:28 PM
Email ThisBlogThis!Share to TwitterShare to FacebookShare to Pinterest