Last weekend was Jeni's birthday so to celebrate a group of us paid a visit to Akbar's Indian Restaurant in town - an unusual change from the Curry Mile for us. 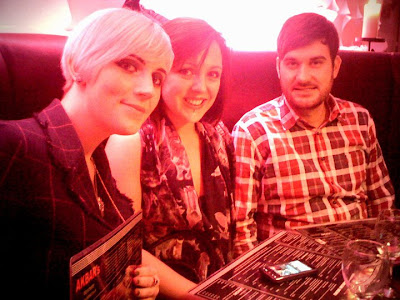 Unfortunately, due to it being both the Manchester Derby and Valentine's weekend, the whole of town, especially Akbar's was full to the brim of people. As Akbar's doesn't accept bookings, this meant we were either going to have to go elsewhere or wait until a table was available. However, we could see from the eager faces of the people waiting that our Akbar's experience was going to be well worth the wait so decided to pop up the road for a quick drink. The lady on the front desk provided us with a super futuristic pager which they would beep us on when a table was ready.

When we finally sat down it was around half past 9 at night so we were all really hungry and excited about eating.

They brought us the usual tray of pickles and poppadoms which everyone dove into gratefully. I was amused to see that through his hunger Bailey took to eating them in a somewhat unconventional fashion. 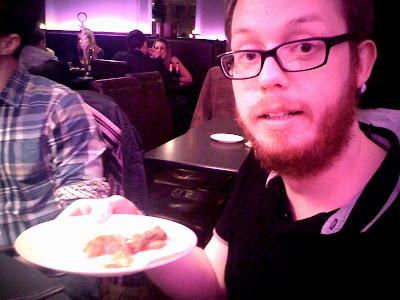 He made quite a mess on his plate but apparently thoroughly enjoyed himself. 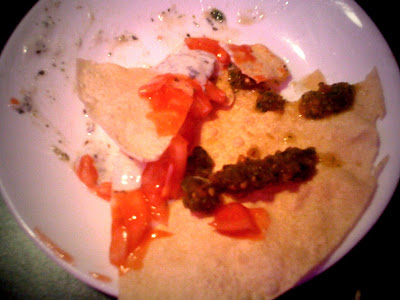 Myself and Krystle both decided to go for the same thing - Vegetable Rogan Josh with rice and salad (as some of you may know I like to have salad with my curries for extra texture. Delicious).

Bailey however decided to order the "Chef's Challenge". The description of this dish on the menu is as follows: "Chicken, Lamb keema and potatoes cooked in the famous Akbar's balti sauce served with naan and pilau rice. If one can finish this challenge alone you will qualify for a free dessert."

I was really excited because, as avid viewers of the television series Man Vs Food, Bailey and I often say we wish there were more restaurants in the United Kingdom that promote gluttony in the same way as in the States through "challenging" people to eat as much as they possibly can. Bailey was pretty confident that he would be able to devour this meal as well as the free dessert with very little difficulty.

I thought the service at the restaurant was very good, with the attentive waiter telling us exactly how long he expected it would take for our meals to arrive.

The first thing to arrive at our table was the absolutely ridiculously sized Family Naan breads (one of which was intended only for Bailey to eat as part of his Challenge) - which they obviously knew would not fit on any ordinary sized restaurant table so had taken to hanging them from a spike to serve. This to me is a fantastic idea although it did impair my ability to look at Adam Barlow from across the table. 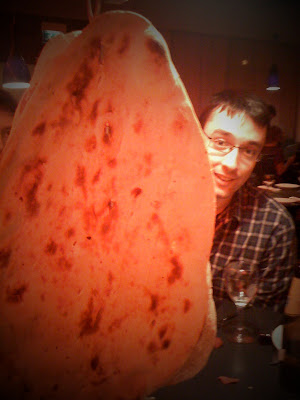 Once my Rogan Josh arrived I set about trying to fit the massive amount of food onto my plate due to there being absolutely no space on our table for the sheer amount of different dishes we had ordered between us. 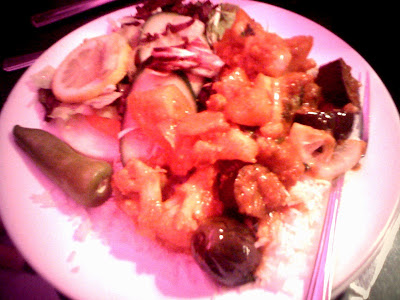 The fact that it was an enormous plateful of food did not stop me scoffing every last delicious drop of it, including the chilli. My only criticism would be that the salad was a little onion-heavy. Again this did not stop me from eating every last scrap of onion, resulting in my very smelly breath for the rest of the evening.

Bailey, however... was not so fortunate. 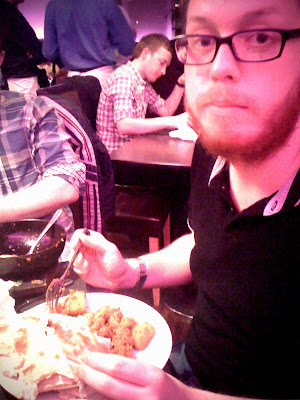 I believe he began to struggle about halfway through the Chef's Challenge, perhaps due to his poorly thought-out tactic of attempting to devour the entire Family Naan bread first by dipping it in the oil and sauce from the curry. This helped him to eat the Naan but what was left after this was very dry pieces of curried meat that were almost inedible to a man so full of bread produce, not to mention the rice.

Unfortunately Bailey had to admit defeat after several attempts to complete the challenge. 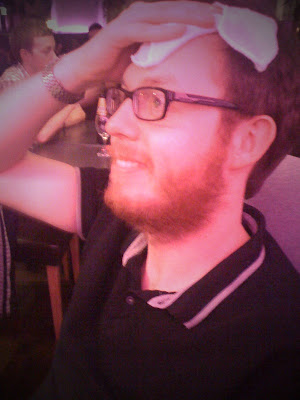 The waiter, although clearly amused by Bailey's inability to complete the Challenge, was very nice about it and even brought Jeni over a lovely birthday dessert complete with candle and happy birthday song. 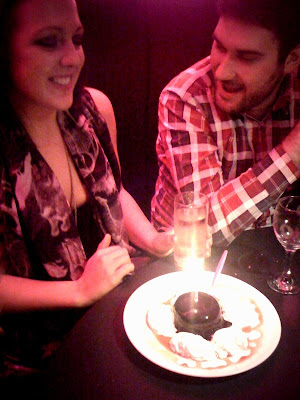 I had a really lovely time at Akbar's and thought that the friendly service, fun atmosphere and yummy food made for a really good meal out. I think the Chef's Challenge is a nice idea as we all had a great time laughing at Bailey trying to complete it. I would definitely recommend Akbar's as a slightly more fancy Indian restaurant than what we normally go to on the Curry Mile - very nice for a special occasion such as Jeni's birthday.

Posted by Jules at 8:29 AM
Email ThisBlogThis!Share to TwitterShare to FacebookShare to Pinterest