Both Bailey and I are lucky to have very supportive colleagues. My head of department Anne is the best boss you could ever wish for and has made sure my first half term as a newly qualified teacher has gone very smoothly. Steve, who is Head of Years 7, 9 and 11, gives me a lift to school every day and doesn't seem to mind listening to my blabbering for 90 minutes a day. Bailey's boss Kate is also amazing and has given him a great leg up the career ladder over the last three months.  So we thought what better way to thank them for all their help than by baking them a batch of Hallowe'en cupcakes? 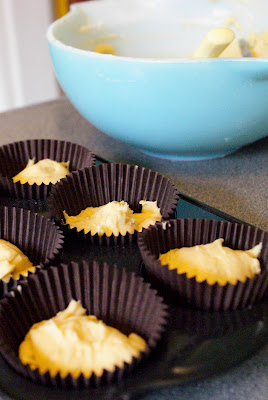 I decided to make some simple vanilla cupcakes but to then go all out on the icing and ended up making not one, not two, but THREE different types of icing. When making the cakes I made sure I was really careful and precise with my ingredients and mixing for once, and I properly preheated the oven rather than just whacking it on and hoping for the best. Once again, it appears our new muffin tin really did the trick and out of the oven came trays of perfect cakes. 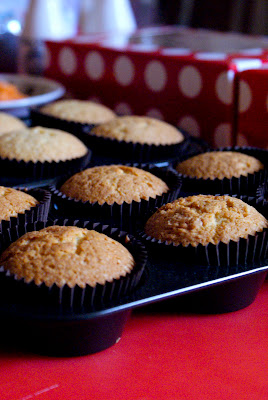 I then made vanilla icing with orange colouring, chocolate icing and our old favourite the orange cream cheese icing but with the new addition of Taste the Difference Seville Orange essence. Very fancy indeed. 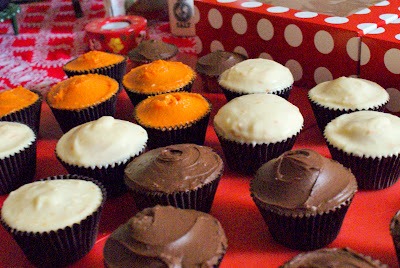 To decorate the cakes I bought all the sweeties and bits and bobs I could get my hands on in Sain's and went crazy. The end result of this was not the classily decorated cupcakes I had envisaged, more cupcakes that would make you think "they look nice considering a child made them". 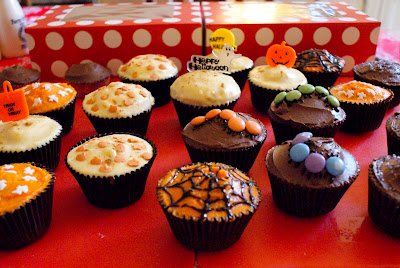 However, it's the thought that counts and I think what will make these gifts special are the lovely polka dot cake boxes I found on sale for £1.50 in the Arndale Food Market. 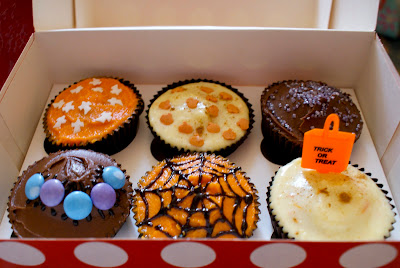 Bailey and I are going to give the cakes out tomorrow. Fingers crossed that their recipients will enjoy them!
Recipe:
Vanilla Cupcakes (makes 19 large cupcakes)
165g unsalted butter
335g golden caster sugar
3 large eggs
225g self raising flour, sifted
190g plain flour, sifted
A pinch of salt
180ml semi skimmed milk
Half a teaspoon vanilla essence
Preheat the oven to 160 degrees C. Cream the butter and sugar together until smooth. Beat the eggs in one at a time. Combine the flours and salt in a separate bowl. Add the vanilla extract to the milk. Add one third of the flour and beat in. Add one third of the milk and beat in. Repeat until all flour and milk has been added. Add the mixture to muffin cases and bake for around 25 minutes or until golden. 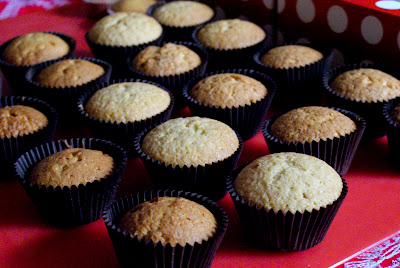 Chocolate icing (ices around 8 large cupcakes)
60g dark chocolate
75g butter
A third of a tablespoon milk
85g icing sugar.
Melt the chocolate in the microwave. Add all the ingredients together and mix.
Vanilla icing (Hallowe'en stylee) (ices 6 large cupcakes)
35g butter
20ml milk
A third of a teaspoon vanilla extract
166g icing sugar
Orange food colouring
Mix all the ingredients together except the food colouring. When mixed and lump free, add the food colouring a drop at a time until it is a Hallowe'eny, pumpkiny colour. 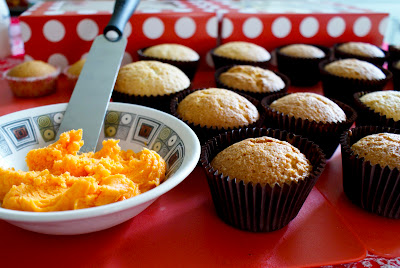 Orange cream cheese icing (ices 6 large cupcakes)
60g cream cheese
150g icing sugar
41g butter
Zest of an orange
A drop of Seville Orange extract
Mix all the ingredients together thoroughly until there are no lumps.
Posted by Jules at 6:35 PM
Email ThisBlogThis!Share to TwitterShare to FacebookShare to Pinterest